Accomplishments: Our Player of the Year, the Cherokee fireballing lefty had a 22-0 record with 272 strikeouts and 13 shutouts in her senior season. She had a 73-8 career record with 735 strikeouts in leading the Chiefs to two state titles. Headed to Robert Morris University, Cohen also had 100 career hits.  In college, received numerous Conference pitcher of the week.  Pitcher of the Year in 2005, NFCA 2nd Team All Region,  Tournament MVP in 2005, All NEC 1st Team in 2005, All NEC 2nd Team in 2006.  Also in record books for games pitched  and shutouts

Accomplishments:  Rewrote the record books at Lehigh; Player of the Year for Courier Post

All American 1st Team All Region - All 4 Years

2007 (Freshman):Named to the America East All-Conference First Team and the All-Rookie Team ... also named to the America East All-Championship Team ... selected as the America East Rookie of the Week on March 19 and April 23 and Pitcher of the Week on March 19 ... went 16-12 in 33 appearances and sported a team-best 2.12 ERA ... the 16 wins were the most ever by a freshman in school history ... also broke the school’s single season strikeout record with 188 in 191.1 innings pitched ... held opposing batters to a .222 average ... recorded four shutouts ... led the America East in innings pitched and strikeouts, ranked second in appearances and third in wins and ERA ... had a stretch of 25.1 scoreless innings while winning six straight games early in the season ... fanned a season-high 13 batters against Holy Cross ... also struck out 10 against Rhode Island ... pitched 2.1 scoreless innings of relief against Manhattan to earn her lone save ... threw a two-hitter in a complete-game shutout against Stony Brook ... threw every inning at the America East Championship and allowed two runs on two hits while striking out four as Hartford eliminated Boston University.

Before Hartford: Played four years of varsity softball at Tottenville High School ... a three-timeAdvance All-Star ... a two-time recipient of the Smith Cup, an award given to Staten Island’s outstanding high school softball player ... had a streak of 70 regular-season innings without allowing an earned run ... in 2006, went 13-0 during the regular season with a 0.24 ERA and 190 strikeouts in 88 innings ... also batted .516 with 38 RBI and 25 runs scored ... went 13-0 in 2005, giving up only one earned run over 72 innings with 11 hits and 141 strikeouts ... helped her team to three straight PSAL A city championships and a Metro Bowl championship in 2005 ...Newsday Player of the Year for New York City in 2005 ... NYSSA Class AA All-Star First Team selection in 2006.

Accolades: She and the rest of the staff were named the 2015 National Fastpitch Coaches Association East Region Coahing Staff of the Year after leading the Cougars to their first College World Series appearance in nearly 30 years.

Other Accolades:  All South Jersey Selection from Cherokee HS

Other Accolades: Set school records for Strikeouts in a game, season,  and per seven innings, Maronski was selected to the NJAC All-Conference and National Fastpitch Coaches Association East All-Region first teams and the Eastern College Athletic Conference Metro Region All-Star second team. She was chosen the Most Outstanding Player and to the All-Tournament Team at the NCAA Ithaca Regional. Maronski was also on the NCAA Rochester Super Regional All-Tournament Team. She finished her career holding the University marks for ERA (0.93) and strikeouts per seven innings (7.7); Name to All South Jersey 1st Team for two years pitching at GCIT.

Other Accolades: #1 in appearances per season, #1 wins in a season; verbally committed to Monmouth prior to senior year in HS

Other Accolades: HS State Championship (2010 and 2011); All South Jersey Selection; Player of the Year,

Other Accolades: Was a member of the Washington Twp team who won back to back state titles.

Other Accolades: All South Jersey Selection

Mandell, a First-Team All-NESCAC selection and Second-Team All-Region honoree, finished her first season with a .439 batting average, good for second in the NESCAC. She led the team in at-bats (98), hits (43), doubles (12-3rd in NESCAC) and RBI (26) to go along with her three triples, three home runs and 23 runs scored. Mandell hit safely in 24 of 30 games in 2017, including six and seven-game hitting streaks.

Other Accolades:  Atlantic 10 All Rookie Team, 1st Team All South Jersey, Named South Jersey Player of the Year from Philadelphia Inquirer and Courier Post for HS.

Notables: Currently ranks third all-time at Syracuse in career fielding percentage at .991 ... Set a freshman record in 2018 with 319 putouts

*Played 3 years with SJ Mystics, committed prior to Sr. year in HS.

Lauren Ordemann - University of the Sciences in Phil. 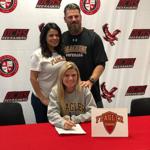 Interested in becoming a sponsor of South Jersey Mystics?